Olympus Mons | The Biggest Hotspot in the Solar System 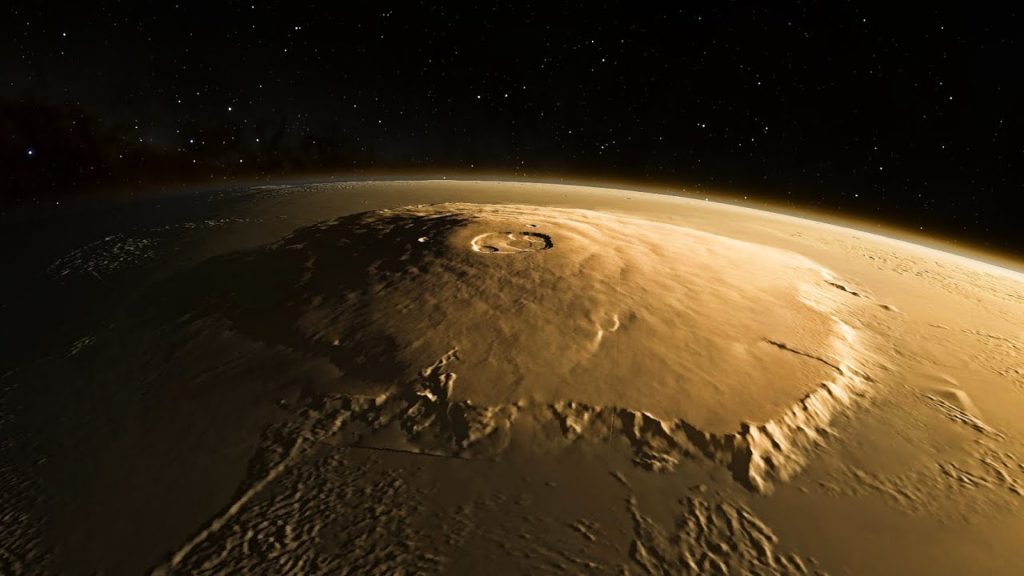 Mars, our closest planetary neighbor, is cool for a ton of reasons—it’s named after the Roman god of war, it’s been the host of four rover missions (with a fifth on the way), and it’s been the subject of countless works of science fiction. But did you know that it’s also home to the largest volcano in our solar system? That’s right—Mars has a volcano, and it’s really, really big. Olympus Mons is a shield volcano located in Mars’ western hemisphere. It is the largest volcano in the solar system at 72,000 ft tall (two and a half times the height of Mount Everest) and 374 miles wide (nearly the size of the state of Arizona). Mars’ atmosphere is so thin that the volcano’s peak actually pokes out above it, meaning that if one were to hike to the summit of Olympus Mons, they would hike into space.

Shield volcanoes like Olympus Mons are formed as lava slowly flows out of the ground and spreads out, creating a low, squat appearance. Shield volcanoes have an average slope of only 5%, which makes Olympus Mons’ height even more impressive. Scientists believe that Olympus Mons grew so much larger than any volcano on Earth because of Mars’ low gravity, slow-moving tectonic plates, and high volcanic activity.

Scientists posit that Olympus Mons is still a fairly young volcano from a geologic standpoint, estimating it to be only a few million years old. That being said, there’s a good chance that it’s still active and could erupt at some point in the future. This means that Olympus Mons, which is already the size of France, could get even bigger as fresh lava flows to the surface and cools.

On October 13, Mars will reach opposition with Earth, meaning that Earth will be directly between Mars and the Sun. Mars will also be at its closest point to Earth in its orbit during opposition, making it appear bigger and brighter in the sky. Mars oppositions occur every two years, but during this particular cycle, the Red Planet will be especially close to Earth—and it won’t be this close again until the year 2035. We’re celebrating this special astronomical event with Mars Month, a series of Interactive Stargazing streams during which we’ll show you live views of the Red Planet at its biggest and brightest, in addition to any objects our viewers would like to see. These very special streams will begin on October 6, so don’t miss out!