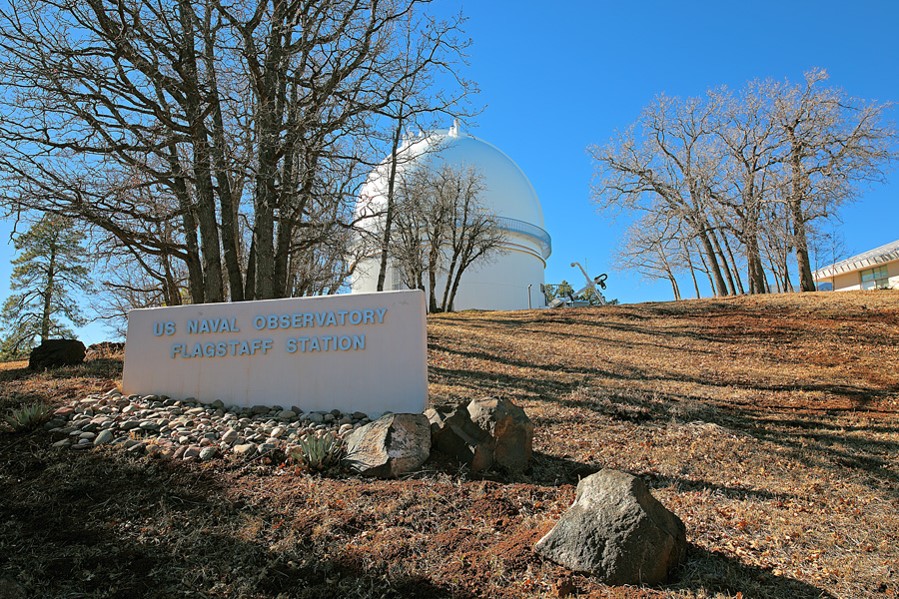 As part of its 3rd Annual I Heart Pluto Festival, Lowell Observatory is offering a VIP experience that allows participants deluxe access to all festival events. This includes:

1pm Tour of Putnam Collection Center and the Plate Vault.
For 50 years, the two Pluto discovery plates were separated, with one in the Lowell archives and the other on display at the Smithsonian’s Air & Space Museum. The two were reunited last year and are now preserved together in the Putnam Collection Center. Join Archivist/Librarian Lauren Amundson as she shares these plates, as well as other Pluto-related items in our collections. You’ll also have the chance to explore the plate vault deep in the recesses of the Slipher Building. Dr. Stephen Levine will explain the new project that involves scanning the thousands of Pluto search plates and making the data available for researchers.

2pm Tour of Lowell Observatory’s Anderson Mesa Dark Sky Site.
We’ll ride in a bus to the USNO and visit several telescopes. Charon discoverer Jim Christy and his wife (and Charon namesake) Charlene will be on hand for pictures.

Tour of Lowell Observatory’s Anderson Mesa dark sky site (note this is in place of the originally planned tour of the US Naval Observatory Flagstaff Station, which had to be canceled due to ongoing COVID restrictions).

The Anderson Mesa dark sky site was established in the late 1950s and is the locale of several of Lowell’s research telescopes. On this tour, we’ll take an outside tour of the tantalizing Navy Precision Optical Interferometer (NPOI). This technological marvel uses an array of mirrors spread tens to hundreds of meters apart to make highly accurate measurements of light from objects in space. The NPOI is a collaborative effort between the U.S. Naval Observatory, the Naval Research Laboratory, and Lowell Observatory. NPOI can record images of stars and optically separate distant pairs of stars so close together that they appear as a single star in even the largest conventional telescopes.
NPOI has the ability to measure the precise relative positions of stars across the sky, which the Naval Observatory uses as a reference system for the determination of positions on Earth and in space and for monitoring timekeeping.

We’ll also take an exclusive tour inside the dome that houses the 42-inch Hall Telescope. Opened in 1970, this instrument has been key in studying comets and asteroids as well as studying the long-term behavior of the Sun and Sun-like stars.

4pm Tour Pluto Discovery Day.
After the USNO tour, we’ll get back on the bus and ride to downtown Flagstaff, where we’ll retrace Clyde Tombaugh’s “Day of Discovery”. Along a half-mile walk, see the Orpheum Theatre, where Clyde watched a movie on the evening of discovery, Karma Sushi Bar Grill (it was then known as the Black Cat Café), where he ate his meals, and the old post office building (now Aspen Sports) where he picked up the observatory’s mail.

5pm Pluto Drink at Civano Coffee House and Night Club.
Pluto tours can make you thirsty, so from the old post office building, we’ll walk a couple of blocks to The Runway Nightlife and Eats, which is a coffee house during the day but transforms into a nightclub in the evening. After a refreshing “Pluto” cocktail here, we’ll return by bus to Lowell Observatory.

6pm Back at Lowell Observatory

*Alden & Cherylee Tombaugh and Jim & Charlene Christy will join us for the VIP Tour. Alden is Clyde Tombaugh’s son and Cherylee is Alden’s wife; Jim discovered Charon in 1978 and named it in honor of his wife, Charlene. They will be glad to chat with you throughout the tour.