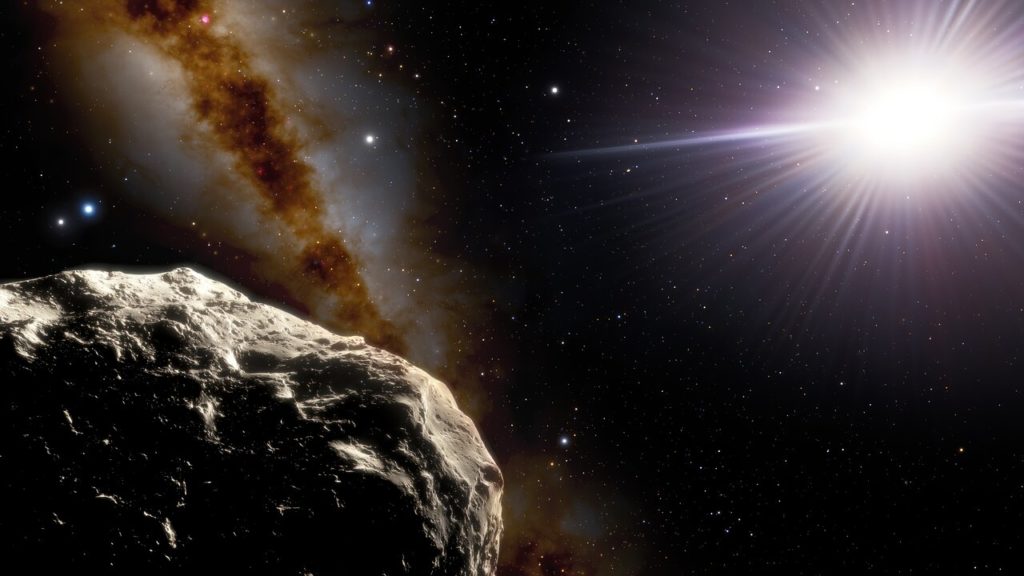 In this illustration of 2020XL5, the asteroid is shown in the foreground in the lower left. The two bright points above it on the far left are Earth (right) and the Moon (left). The Sun appears on the right. Credit: CTIO/NOIRLab/NSF/AURA/J. da Silva/Spaceengine

Flagstaff, AZ. – Supported by observations made with the 4.3-meter Lowell Discovery Telescope (LDT) in northern Arizona, an international team of scientists confirmed the existence of the second-known Earth Trojan Asteroid (ETA), 2020 XL5. The findings culminate a ten-year search for such an object and was led by Toni Santana-Ros of the University of Alicante and the Institute of Cosmos Sciences of the University of Barcelona.

The discovery of ETAs is significant because they provide insight into the dynamical evolution of the solar system. Also, ETAs are ideal candidates for potential space missions in the future because a spacecraft would require relatively low energy to stay in its shared orbit with Earth. “Earth Trojans might become ideal bases for an advanced exploration of the solar system, or they could even become a source of resources,” says Santana-Ros.

The term Trojan describes a celestial body—usually an asteroid—that exists in one of two gravitationally stable areas, called Lagrange points, that lead ahead of or lag behind a planet in its orbit. Scientists have long known of Trojan asteroids associated with Jupiter, Mars, and other planets, but not until 2011 was an Earth Trojan, 2010 TK7, detected. Subsequent searches for other ETAs proved fruitless for years.

Discovered on December 12, 2020, using the Pan-STARRS1 survey telescope in Hawaii, 2020 XL5 became a very promising candidate to be the second ETA known. However, a further study was needed to confirm its orbit and show that it was truly an ETA and not merely a near-Earth asteroid crossing Earth’s orbit. The ensuing research confirmed its identity as an ETA and showed that it measures about one kilometer in diameter–three times the size of 2010 TK7. Devogele obtained 13 exposures and stacked them for one image (lower right) that clearly shows 2020 XL5. From this, the team precisely measured the position of 2020 XL5. Santana-Ros says, “This measurement was crucial to consolidate the orbit of the object and plan the follow-up observations.”

The findings also suggest that 2020 XL5 will not remain a Trojan asteroid forever. It will remain stable in its position for at least another 4000 years, but eventually it will be gravitationally perturbed and escape to wander through space.

The research is presented in a paper, “Orbital stability analysis and photometric characterization of the second Earth Trojan asteroid 2020 XL5,” published on February 1, 2022, in Nature Communications.

Science Contact
Toni Santana-Ros, University of Alicante and Institute of Cosmos Sciences of the UB
tsantanaros@icc.ub.edu