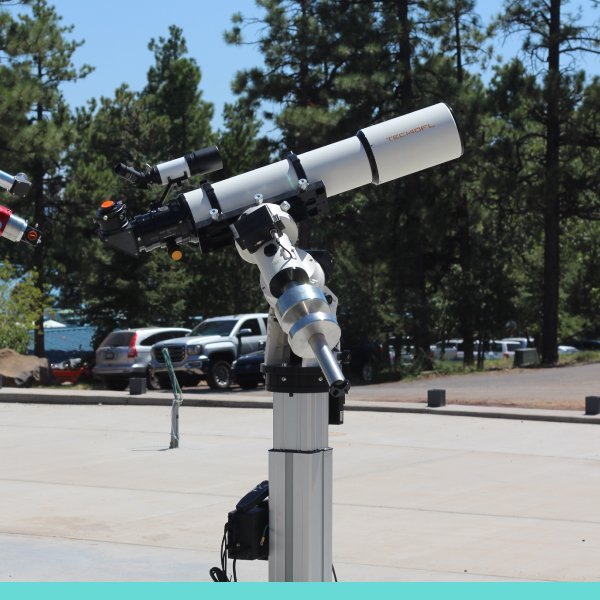 Each of the Giovale Open Deck Observatory’s six state-of-the-art telescopes were hand-selected to provide a breathtaking stargazing experience that is unrivaled by any other public observatory in the continental United States. In this blog series, we’ll be taking a deep dive into what makes each of the GODO telescopes the best of their kind.

Small In Size, Big On Views

Despite being the smallest of the GODO telescopes, the 5.5” TEC Wide-Field Refractor packs a serious punch! The telescope was custom-built for Lowell Observatory by the Telescope Engineering Company (TEC), which operates out of West Pleasant View, Colorado.

Lowell’s TEC telescope features a triplet apochromatic lens, meaning that it has three lenses spaced apart with oil. The center lens is unique in that it is made out of a crystal called calcium fluoride (CaF2), also known as fluorite. TEC’s fluorite is grown in a lab to ensure purity of the crystal for use in optics. In contrast to optical glass, synthetic fluorite is absolutely homogeneous and does not contain any bubbles.

Triplet lenses like that of the TEC bring the primary colors red, yellow, and blue into a sharper focus, allowing viewers to see sharp and accurate coloring of stars in the night sky. Combined with its 3” eyepiece, the TEC transforms into the perfect wide field instrument, allowing viewers to see uninterrupted views of large star clusters and galaxies.

The 5.5” TEC also features a  FTF#3545 Feather Touch Focuser, which represents a collaboration between TEC and Starlight Instruments. The telescope’s 1100 GTO mount was created by a company called Astro-Physics.

How We Use It

The Moon, shot through the TEC. | Juan Alaniz

“Here at Lowell, we like to point the TEC at bright objects that offer an abundance of detail. When the Moon is up, the TEC is unrivalled for viewing the mazes of craters and maria (large, dark, basaltic plains on the lunar surface). We also look at star clusters or binary star systems with the TEC telescope. Because of the triplet fluorite lens function, stars appear sharp and true to natural color, allowing observers to see some of the clearest views of the star in the night sky. The TEC telescope is lightweight, making it ideal for swift movement. Truly, the TEC telescope is one of the most versatile telescopes at the Giovale Open Deck Observatory and is certainly a staff favorite!”

TEC began in 1994 as a distributor of optics for several companies in Eastern Europe, including the Maksutov Telescopes in Kiev, Ukraine. The company was successful and began to install similar optical systems in other parts of the world, specifically in the United States. Seven 1-meter telescopes were installed on Mt. Wilson, creating a multi-array interferometer to search for exoplanets around the closest stars to the Solar System.

Eventually, TEC decided to work in their own production of telescopes and optics. In 1998, the production of optics started in Golden, Colorado. In 2002, TEC began manufacturing small refracting telescopes for the market, including APO140 F7 ED oiled triplet telescopes similar to Lowell’s 5.5” refractor.

When asked what makes TEC different from other telescope manufacturing companies, TEC President Yuri Petrunin stated that they are a small company that feels very much like a family, and that they provide a unique selection of telescopes built with the best materials available. Though fluorite is one of the most expensive materials for lens-making, it has the ideal properties for making high quality telescopes. “We have a relatively large range of apochromatic telescopes: 140 F7, 160 F7, 180 F7, 200 F8, 250 F8.8, 300 F10,” he says. “And by the way, they are all Fluorites.”