The Super Scopes Family Adventure lasts 90 minutes and highlights the planets that were famously studied at Lowell Observatory. This guided tour is led by an observatory educator and includes spectroscopy and liquid nitrogen science experiments as well as stops at the 32-foot-long Clark Refractor that Percival Lowell used to study Mars, the Pluto Discovery Telescope that Clyde Tombaugh used to discover Pluto, and the new Giovale Open Deck Observatory where you will observe the stars, weather permitting. This tour includes steep grades and 1 mile of walking outdoors.

Note: Due to the rotation of Earth, sunset times change throughout the year and stargazing may be limited. 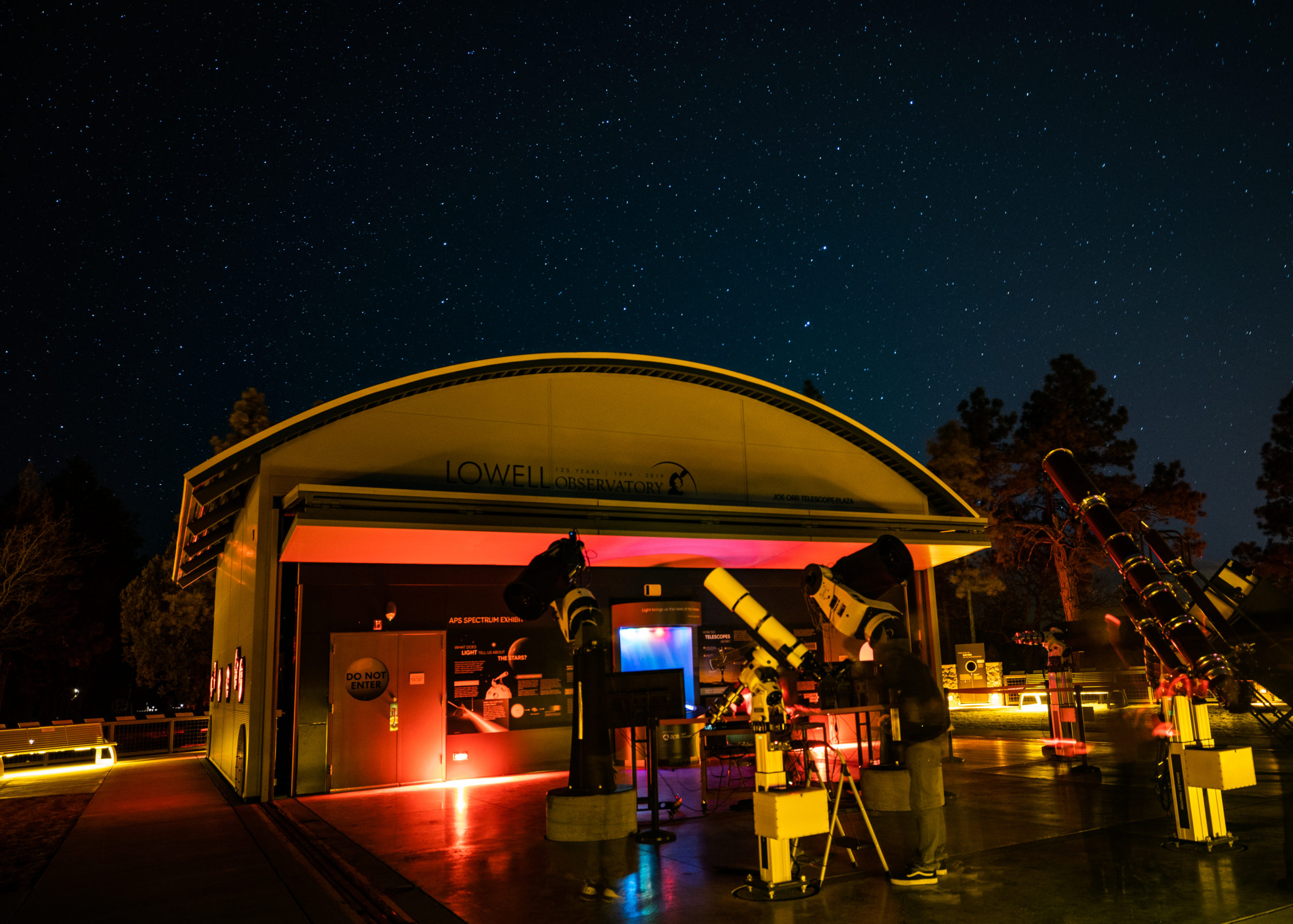 After checking in at the Steele Visitor Center, your adventure begins at a telescope that’s the size of a T. rex: the 124-year-old, 32-foot-long Clark Refractor. This 24” diameter telescope was used by Percival Lowell to study Mars and other planets, by Vesto Slipher to find the first evidence that our universe is expanding, and by scientists in the 1960’s to create detailed maps of the Moon in preparation for the Apollo Moon landings. Doors and dome shutters are kept open at the Clark Dome in fair weather to facilitate fresh airflow while guests are inside.

Next, the tour takes you to 1930, when amateur astronomer Clyde Tombaugh discovered the dwarf planet Pluto, right here at Lowell Observatory. You’ll pass by the building that housed Tombaugh’s office and living quarters as you head up the Pluto Walk toward the Pluto Dome, which houses the 13” Lawrence Lowell Astrograph, which was used to image Pluto. Because of the small size of the Pluto Dome, guests will tour the interior in groups of five. Outside, your educator will use liquid nitrogen to explore what conditions are like on Pluto.

The final stop of your Mars and Pluto Family Adventure is the Giovale Open Deck Observatory plaza, which just opened in October 2019 and is home to six advanced telescopes. One by one, you’ll get to see a variety of celestial objects up close. The GODO includes four visual telescopes that you’ll put your eyes to, including the 5.5” TEC wide-field refractor, the 8” Moonraker refractor, the giant 32” Starstructure reflector and the 16” Meade ACF telescope. Masks are optional when you are outdoors, but they are required whenever you are indoors.

In the event of cloudy weather, your educator will give you a tour of the GODO plaza and its six telescopes, but observing will not be possible.

Your Super Scopes Family Adventure will finish up at the two PlaneWave CDK telescopes, both of which are connected to large screens instead of eyepieces. The 14” PlaneWave is equipped with a MallinCam color video camera that shows detail in celestial objects that are too faint for human eyes. The 17” PlaneWave is equipped with the Slipher Spectrograph, which shows the spectra that astronomers use to learn about an object’s chemical makeup and whether it is moving toward or away from us. In the event of cloudy weather, your educator will use previously captured images and spectra instead of live ones.

At the conclusion of the Super Scopes Family Adventure, you can browse the Starry Skies Shop for gifts to commemorate your out-of-this-world experience.

Note: This tour does not include a stop at the 13″ astrograph used to discover Pluto.